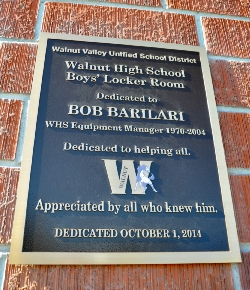 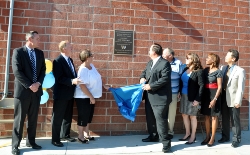 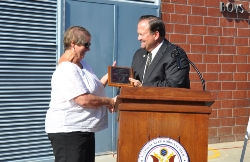 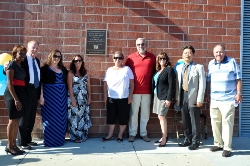 The Boys Shower and Locker Room was dedicated in honor of longtime employee, Bob Barilari. Bob Passed away October 3, 2013. It was only fitting to honor a man who worked with athletes and coaches from 1970 to the time Bob retired in 2004.
NEWS Walnut Valley Unified School District
FOR IMMEDIATE RELEASE 880 S. Lemon Avenue
October 2, 2014 Walnut, CA 91789

Barilari served as the Boys’ Equipment Manager from 1970-2004. A plaque was unveiled dedicating the Boys’ Locker Room in his honor.

The special dedication celebrated Barilari’s legacy of relationships and friendships at the building where he spent over 70,000 hours of his life working and supporting thousands of people.

“Bobby started his legacy at Walnut High in 1970, and at that time, nobody would have realized the impact he would have on all of us 44 years later,” Principal Jeff Jordan said.

Barilari had many outstanding qualities, but the one that stands out the most was his ability to establish relationships with students, coaches, and teachers.

“Everyone knew Bob and Bob knew everything about everyone. Most of us that knew Bob would agree that he was caring, gentle, and big-hearted,” Jordan added.

Many of those friendships continued during retirement and through his battle with cancer. He passed away just one year ago leaving a lasting impression at the school.

“Bobby didn’t realize it, but he was very inspirational to all of us,” said Jordan.

“I don’t know if there’s a more prestigious honor than having a building dedicated to you on a school campus. There will be many, many people that will walk by and will stop and look at the plaque and start to tell stories and learn more about Bob as long as the school is here,” said Superintendent Dr. Robert Taylor.

“Having someone like Bobby here on a daily basis made a real difference to students,” said Board President Cindy Ruiz.

“No one’s going to walk through the doors of that locker room without thinking of him.”

After the ceremony, several guests shared memories of their longtime friend.

‘He was always there for you,” said retired coach Anthony Gomez.

“He was so loving and caring. And he made friends wherever he went,” recalled teacher Mary Jo Gomez.

Three 1970’s alumni friends wouldn’t have missed the ceremony. They got to know him as student-athletes and stayed in touch through the years.

“Bob was the man. And that building was his house,” recalled John McIntire.

“He meant a lot to us,” said Ron and Lynn Himes.

“Bobby’s standout qualities were his genuineness and kindness,” they added.

“Bobby will never be forgotten here. His legacy will serve as a symbol of excellence that we can all strive for,” Jordan said.

Barilari was a huge USC fan. As a tribute after the plaque unveiling, the WHS Band performed his favorite song- the Trojan Fight Song.